The copy-and-paste blocks were created by Munir Kamal. From those blocks, he constructed sections or “patterns.” He has created a plugin that allows users to customise the two characteristics completely via block options. He released an initial offering yesterday of 22 landing page templates that are based on his earlier work.

It is almost possible to call the Gutenberg Hub his magnum opus, at least at this stage of his career. It is a continuously growing library of free tools for the block editor of WordPress.

Gutenberg Hub ‘s landing templates, like previous projects, require the EditorPlus plugin. Essentially, this plugin is a suite of design controls for the core WordPress blocks. By default, the templates make use of these options. The use of such a plugin is necessary, given the limitations of the current design controls of the block editor. Otherwise, there would be few other ways to create a template system like this in a realistic way.

Users currently have to copy the block code from the Gutenberg Hub website and then paste it into the editor via a convenient ‘copy’ button. It is not an ideal situation, and for months now, I have been asking Kamal if he would consider building a template inserter.

He preemptively said “And, by the way, I am already working on adding a Template Inserter in my EditorPlus plugin. That will allow users to browse and insert these templates directly from Gutenberg without leaving the website.”

He was aware that the question was coming. It’s not necessary for me to ask again. A current screenshot of what the inserter looks like could not be shared, but he asks for feedback on what people expect from the user experience and interface.

“Earlier, I created a template inserter similar to other blocks plugins, but later I changed my mind and thought that I should integrate with the Gutenberg Patterns API and load the templates into the ‘patterns’ panel in the block inserter,” he said. “But, I am having a few issues and thinking about going back to the original idea to have a Templates button on the top toolbar that opens a popup window to browse and filter templates that users can insert on a click.”

It is still early, for now. At least it is, however, on the long-term roadmap and being worked on. 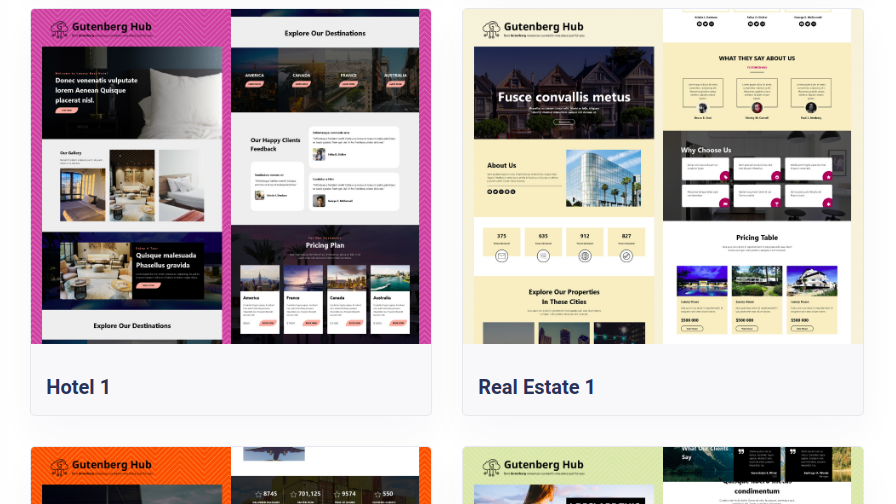 Gutenberg Hub currently offers 22 templates for the landing page. The terminology of “page” may not mean “full page.” It simply depends on the theme being active. Some themes have a template open-canvas type that allows users to create the entire page through the editor. That is not a common feature, however, so these page templates will in most cases be confined to the post content area.

With themes that have at least a full-width or no-sidebar option, the templates also work better. To use the templates and tinker with their designs, end-users will want a lot of breathing room.

Kamal has developed models that stretch across a range of industries. There is a lot to choose from right now, from restaurants to gyms to education to fashion. More are on the way and at least a 23rd template in the next few days, he promises.

“For the niches, I did some research from the top WordPress and HTML marketplaces. And found the following most common or popular niches,” he said. “I think I will stick with these niches unless I get some more recommendations.”

Redux Templates, by comparison, offers access to over 1,000 sections and templates. There are trade-offs, of course, such as some of those being commercial and the plugin typically requires other plugins from third parties. While quantity is not the only thing to look at, it proves that there are miles of landscape that have not yet been explored by Gutenberg Hub’s templates. It is, however, merely the beginning.

The full-page templates of the Gutenberg Hub are not quite as plug-and-play as the templates of its blocks and sections. This is not so much a flaw from the end of the developer. It is a platform issue that is constantly being updated, as well as the range of support from current themes. End-users will start seeing some of the system’s current limitations when a layout with one theme does not look quite right, but with another. Or, if their theme hasn’t been updated to support a new feature, such as the Social Links block, a normal vertical list of links will probably be the typical horizontal menu design instead.

They’re not insurmountable problems. Before projects like Gutenberg Hub ‘s landing templates are perfect or at least as close to perfect as can be expected, Gutenberg and themes need more time to mature.

With its templates, there are some things that the Gutenberg Hub could improve. With several I tested, to be full width, I had to switch specific blocks. This should be set up as the default with templates in the example screenshots available on the site that are clearly meant to be full width. It’s a minor problem, but fixing this in the editor fixed a number of layout problems I had when using the templates.

The second question that Kamal has not been fully prepared to answer over the past several months is how the Gutenberg Hub will be monetized. Eventually, when building tonnes of free tools, developers need some return on their investment. As long as their bills were somehow paid, many would do it all for free. But the truth is that there will be a tipping point where their projects need long-haul maintenance funding.

Kamal said he has laid the groundwork for funding, but nothing has yet been finalised. There are three ideas he is currently working on:

He is open to feedback on how to make the website and its projects best monetized. He said, however, he is unwilling to compromise on giving free templates and tools for the present and future.

Kamal said he has no new projects in the pipeline related to Gutenberg. The current plan is to work on what he has already created. Which is a vast ecosystem of Gutenberg instruments that work together somehow.

He is beginning to write more free tutorials on the Gutenberg Hub blog outside of blocks, templates, and plugins. And focuses on creating videos around the project, including a new tutorial series for beginners.