Riad Benguella, from the core development team, announced the release of Gutenberg 7.7 was on March 11 last week. It comes with exciting new features, enhancements, bug fixes, new APIs and more.

Gutenberg 7.7 is the first version of the plugin that comes with a fullscreen editor. But this feature will be available from WordPress 5.4 version. WordPress 5.4 is set to be released on March 31, 2020.

The latest Gutenberg 7.7 includes more than two dozen bug fixes. It also includes a “View Posts” back button at the top of the editor while in fullscreen mode. Instead of the arrow button, which was confusing for users who thought it might be going back to the regular edit mode, the team replaced it with the WordPress “W” icon.

What’s New in the Gutenberg 7.7

The design team presented a refreshed UI, one of the visually striking updates. Also, users can now test the next block pattern feature as well. 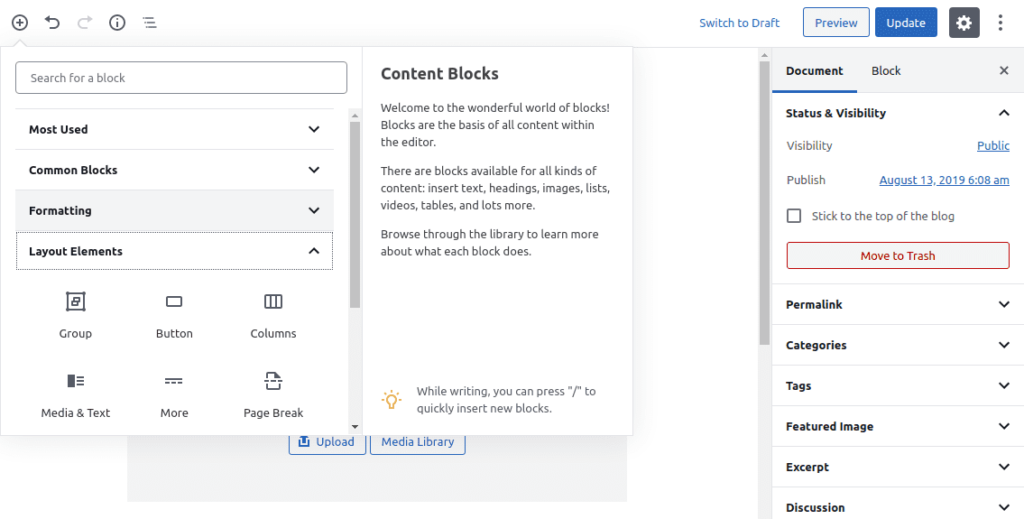 Nothing has changed in the latest editor UI, but the buttons and elements have received a decent update. Now the editor looks more professional than the previous versions. The toolbar block is user-friendly and clean. The design team has changed the icons and contrast to make the editor more streamlined.

The block inserter is now using the maximum height of the editor. It is a significant improvement over previous versions. This means less jumping around to find the correct block.

The design team made this first change in this version of the Gutenberg editor. Currently, they’re focusing on the other aspects of the editor, such as sidebars, drop-downs, and other features. We’re going to see these changes in upcoming editions.

I feel that the UI is a lot more polished now. I would suggest you try out the Gutenberg plugin.

This was one of the most important solutions for the users of Gutenberg. There are a number of built-in blocks available in the Gutenberg editor. However, it was difficult for users to set all these blocks and create the desired pattern for their page.

And complicated designs were really difficult to create in the Gutenberg editor by placing all the blocks one by one. And this problem has been solved with the latest ‘Block Patterns’ feature. Users can now select from their ‘template’ blocks, edit them easily and use them on their respective pages.

Now, the team has included only four patterns:

The block pattern feature worked without any problems in our testing. After selecting the sidebar patterns, simply pick the template you like, which is inserted directly into the content field of the editor. From that point on, you can change it like any other block.

Patterns can definitely make the block editor even more competitive with the page building plugins. More than anything else, it will allow users to create templates more easily.

Now, with the addition of a new clean editor UI and Block Patterns, the speed of the Gutenberg plugin has slowed down a little. Compared to Gutenberg 7.6, the loading time of this latest version has risen from 7.0 seconds to 7.7 seconds. And the duration of the keypress event increased from 34.97 milliseconds to 37.86 milliseconds. This was tested at a post containing 36,000 words and 1,000 lines.

The Gutenberg Editor is slowly making progress. And the introduction of new functionality that is really useful. We’ve got to wait and see what the upcoming updates can bring to us.

How to Increase the PageSpeed Score of Your Website